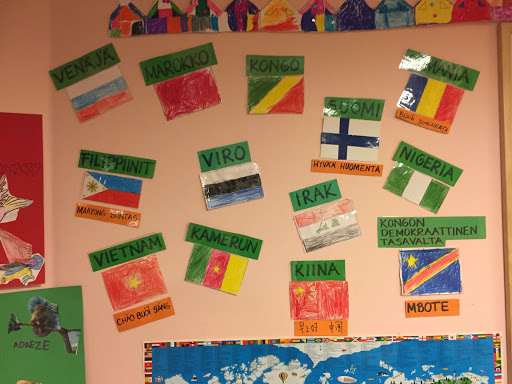 United Nations Day celebrates the anniversary of the ratification of the United Nations Charter that occurred on October 24, 1945. It is a celebration of the ideal of nations united world wide to prevent further crisis to rise after world war II.

Every year also schools in Finland celebrate the United Nations day. This celebration leaves a visible presence or legacy on the walls of schools, especially in the early childhood educational level and early primary school classes where identity and identities markers and understanding them are critical.

Different schools in Finland celebrate this day differently. However, many schools use flags as a symbol to celebrate this day. In some of the schools and kindergartens this means that pupils design a flag of their “country of origin”. The final product, a flag (or other symbols) is what the public sees. What is not often seen or heard is the discourse leading the creation of these flags of origin. This discourse of difference, diversity, unity, and multiculturalism is often lead by teachers with limited training and experience on the issues of “critical” multicultural learning.

On one of these United Nations days, I went to pick up my daughters from the kindergarten. I realised that they both had a flag of Cameroon in their hands. I was deeply troubled. For a few reasons

– Why did they have a Cameroonian flag?

– Who decided that they would have the Cameroonian flag instead of the Finnish flag?

–  Which kids can have the Finnish flag?

Why did they have a flag of Cameroon?

Having a child whose parent is not born in Finland to draw a flag of “a country of origin” definitely serves the kindergarten as an institution in a way that it can give to it a false sense of diversity- one which Sara Ahmed, British-Australian researcher, in On Being Included (2014) would refer to as wallpaper diversity. It is rather typical phenomena that institutions take a lot of credit for being “multicultural” or “diverse” even if  they do not understand what it means to be “diverse” or “multicultural”. Many institutions are invested in “diversity appearance” rather than in “being diverse”.

Besides the use of flags, institutions often carefully display pictures of minority staff or students in their public spaces to sell their “diversity appearance”. If these institutions, like schools or kindergartens, could invest a similar effort on “being diverse” as they do in appearing diverse, they would be much more equal environments to grow.

After seeing my daughters with Cameroonian flags I started to reflect:

Who decided that they would have the Cameroonian flag instead of the Finnish one? Why the teachers did not have a conversations with parents or kids about how they see their origin, home country and cultural identity? What about discussion about which flag kids would have like to have or what flag parents would want their kids to have?  A thing that also troubled me was that not all non-white kids or kids with immigrant background parents are comfortable being attached or linked with part of their national heritage and the symbols or associations linked to their country of birth (for reasons like civil war). Some children have parents who come from  countries with a history of political, social or economic crisis areas and some do not have an official home country.

Which kids can have the Finnish flag?

Some people may argue that kids were allocated flags based on their parent’s national heritage. The question here is where does this heritage end? Is it one generation? Two generations? Three generations? And who has the right to decide this?

Kids of naturalised Finnish parents also face similar othering if they do not fit into the stereotypical idea of a Finn. For example, if I would have given up my Cameroonian nationality for a Finnish one,  I am afraid that this change would not have been reflected in the United Nation Day celebration.

Back to the real question, who can swing the Finnish flag? I have seen that still very often the answer is: white kids.  And every time this happens it is a typical case of othering and whiteness at work at a very early level.

It can feel like a minor detail who draws which flag but things like drawing the flags of origin are actually the critical junctures where the early seeds of Finnishness, “us” and “them”, Whiteness  “white” as a default and non-white as otherness is sowed in Finnish schools.

Whiteness is systematic, implicit, historical privileges embedded or ascribed to a white “culture” and value. It sees white as a default. In the case of Finland, whiteness and Finnishness are closely entangled. To be a Finn is to be white although to be white does not automatically mean that one is a Finn. If we consider that children whose parents are white and immigrants are very likely to also hold the flag of their parent’s immigrant “heritage”. This does not make this practice less white or othering. What this practice does in essence is that it teaches or sends across a message that being a  Finn means to be born of two white Finnish parents. How can we change this? What are the ways to do different, see different, be diverse – not just show out the differences?

It is important to understand that the ways these issues of origin and heritage are addressed are significant. The term white fragility is used to describe the attempts to reverse effects of racism without paying attention to the irreversible history and daily effects of that history to the lives of those who suffer from racism.

For example, white tears, claims of innocence and outright denial is often used to quash discussions around race and racism in an attempt to protect the white self (individual/racial superiority) rather than to understand the systematic nature of racism. At an individual level, discussions around race and racism in Finland need to be situated around white humility, apology and honest efforts towards antiracism practices and policies. At the same time being only sad or troubled about the racism does not help. White tears do not make victims of racism feel better. It often takes away their voice and forces them into adopting an empathic and apologetic responsibility towards the white fragile person.

In all, if schools and kindergartens choose to keep the celebration of the United Nations Day with making flags, they need to answer the questions raised above. If they choose to allocate flags based on nationality, they should allocate the children with right flags. If they choose this based on parents nationality, they need to involve the parents in this process, not just make assumptions that establishes roots of othering at early childhood education.

Teachers must also understand that having symbols of diversity (flags in this case but also signs like “discrimination free zone”) do not solve issues of discrimination and racism. They have the capacity to produce what they intend to fight against if left unchecked.

Aminkeng A Alemanji researches on issues of race, racism and antiracism education in Finland. His research critiques existing antiracism educational programs in Finland grounded on the framework of multiculturalism. He is currently a university teacher in the masters in Social Exclusion program at åbo akademi, Turku. His current research focuses on developing the first antiracism mobile app in Finland.